New demo version! Patch notes to go with it! 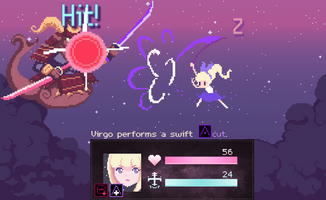 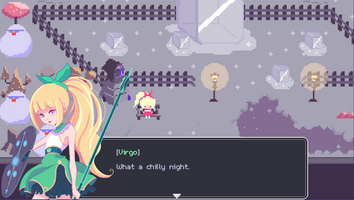 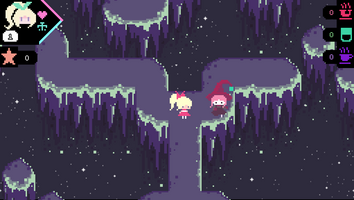 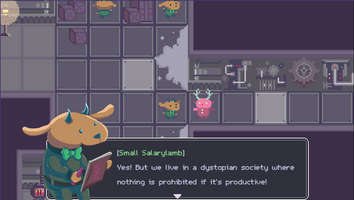 It's been a long while since the demo was first released. I have worked heavily on the game in the meantime, mainly making content for other realms, but some changes have been made to Capricorn's area as well and now an updated demo should better reflect the current state of the game.

Some bugs were fixed and feedback listened so that this experience feels better for everyone!

After some consideration, the game went through a philosophy change in regards to damage in combat. I believe my initial idea for stats and qualities didn't quite match what players understood and in fact it never made much sense to begin with.
Virgo should be first and foremost a game where your defense is active rather than passive, so stats passively reducing damage only harmed the game's balance and philosphy.
I believe the Quality Triangle should be the most important mechanic when deciding damage and it's quite frustrating when enemies didn't exactly follow that. Due to how stats worked before, it was rather confusing as to how double-quality foes would react to damage. If Ambition reduces Cardinal damage but Mutable damage is 'weak' against Cardinal, Ambition shouldn't reduce its own Quality and instead work against Mutable. Also foe that's both Mutable and Cardinal received both increased and decreased damage from Fixed, making it virtually have no weaknesses.
The old comparative system doesn't work if the player cannot see enemies' stats such as in most SRPGs. I believe this change will help the game's experience become more clear and non-obtuse.

Now damage calculations are made differently: Ambition, Patience and Versatility no longer passively reduce Cardinal, Fixed and Mutable damage respectivelly. As you increase your main stats, you'll only see an increase in damage done. All enemies' damage outputs have been adjusted accordingly to provide a more concise challenge between different builds and strategies.
In doing so, all enemies take naturally more damage than before and have been adjusted with resistances matching the Quality Triangle to better reflect what's strong and weak against them.

Passive Damage reduction has been added to some items, such as Armors and Shields, and to "Stat Up" states (Ambitious, Versatile and Patient), to maintain the same functionality as before. Ambitious, Versatile and Patient will increase your damage output for the respective Quality by 40% and respective damage reduction by 20%. The slight debuff to other stats while those states were active has now been removed.

A similar damage vulnerability have been added to "Stat Down" states, respective to the Quality Triangle. Unmotivated, Immutable and Impatient now decrease the afflicted battler damage output by 40% and makes them take 20% extra damage for the respective Quality.

>To not turn Quality attributes completely useless for builds that don't use a certain Quality's offensive abilities, new roles for primary stats have been added:
This will ensure no Quality is useless in the long run, to avoid harming players who decided to change main-quality roles midgame.

Changes have been made to several other areas of the game and are cited below:

Items Renamed
For the sake of consistency with later developed items, some equipment changed names. These are:

These changes are meant to address the upcoming Crafting System and how items will be made through it.

Visual Changes were made to:

AND that's all! Please report any bugs to abductedious@gmail.com or o any social media you prefer!

Get Virgo Vs The Zodiac

Virgo Vs The Zodiac

A cosmic JRPG where you play as the villain.

Hello!
I really love the art for your game, and I was wondering if you had drawn it yourself?

I was wondering if you would like to help me, someone who can't draw, with some art for a visual novel I'm creating about the Zodiac! Let me know if you're interested, it'd be working for free since I'm flat broke, and it'd just be a few pictures of characters and some expressions, so please consider it!

this looks so cool! are all the zodiacs going to be represented in the final game?

Yes, all Zodiacs will be featured in the final game, there's also the Zodiac Memories were Virgo re-visits her memories with each Star!